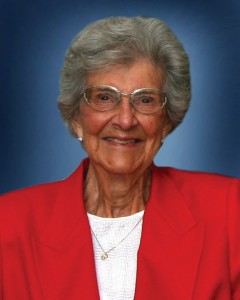 Mrs. Brooks, a founding member of the OTC Board of Trustees who passed away in October of 2011, left behind not only a legacy of dedication to the College but also a $50,000 gift to establish the Dolores and Alden Brooks Memorial Fund.

“Mom was dedicated to the mission. I think of OTC as Mom,” said Barbara Brooks, daughter of Mrs. Brooks.

Mrs. Brooks was a former educator and public school administrator. She served as the first president of the Board, from 1990 to 1992, and held the position again from 2002 to 2003. she was named a Trustee Emeritus upon her retirement in 2010.

“When she had to leave the Board, it was one of the hardest thing for her to do,” her daughter said.

During her many years of involvement with OTC, Mrs. Brooks strived to create the best educational institution possible and let little get in her way of achieving that goal.

“She had the backbone to insist on doing it the right way. She always felt very strongly about giving people the opportunity to development themselves and saw it as a way to help the community. She felt it was necessary to get the right leadership into the College, the ones with the right vision,” Barbara Brooks said.

Mrs. Jackie McKinsey, a Trustee Emeritus, said Mrs. Brooks was the rudder that guided them throughout the years.

“She truly believed in what OTC does to help people better their lives through education. She got it. I admired her integrity and the direct way she spoke to the issues. She was a leader,” Mrs. McKinsey said.

“It was an honor to work with Mrs. Brooks on the OTC Board of Trustees. She was truly committed to the best interests of the students, and I am glad to have known her as both a colleague and a friend.”

Involved in education for many years, Mrs. Brooks served as assistant principal and principal at various public schools in Springfield. She was the first female principal of a Springfield senior high school, Parkview High School.

Mrs. Brooks was named one of the Springfield Business Journal’s Twenty Most Influential Women in 2006, and was involved with many professional organizations.

She was never one to seek out the spotlight, but instead worked tirelessly for the good of the College.

“She had such a great moral compass, always teaching us life lessons,” said Barbara Brooks. “She was never one to toot her own horn. She was all for helping others.”