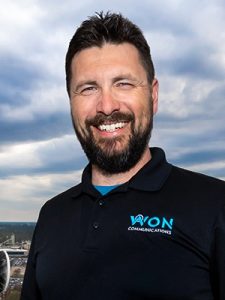 Matthew Thomas spent his childhood on the move, constantly uprooting to new places. He eventually settled in Springfield, Missouri where he attended Parkview High School and graduated in 1995.

Due to his growing interest in electronics, Mr. Thomas dual enrolled in Ozarks Technical Community College’s electronics program while a high school student. He credits his time at OTC – particularly the one-on-one support he received from his instructors – for shaping the trajectory of his career.

After OTC, Mr. Thomas transferred to Missouri State University where he double majored in electronics technology and industrial management. Throughout his college tenure, Mr. Thomas worked the night shift at Northrop Grumman Corporation to pay for school and living expenses. As an inner layer manufacturing supervisor, he was responsible for the day-to-day operations at the plant, including personnel and manufacturing schedules, quality control, systems improvement and production quotas.

Upon graduation from Missouri State University, Mr. Thomas moved to Solon, Ohio where he accepted a position in manufacturing management with Nestlé USA to supervise its logistics department. He later moved to Jonesboro, Arkansas to launch a new Nestlé facility there. Soon after that, Mr. Thomas shifted his focus to entrepreneurial ventures.

When Wireless Fidelity (or WiFi) became commonplace in the early 2000s, Mr. Thomas seized his first business opportunity. He taught himself networking technology and began creating hotspots for businesses and apartment complexes. By 2005, he established his own company that designed, deployed and managed custom wireless networks for businesses.

In 2015, Mr. Thomas and his business partner, Cameron Rose, co-founded Won Communications, LLC. The company, which began as a startup in the eFactory business incubator, offers residential and business internet service as well as phone and information technology support. The company prides itself on being small, local and business-oriented. Today, Won Communications employs 10 people, with a network that covers Southwest Missouri’s Sparta, Springfield, Bolivar and Humansville.

Mr. Thomas currently lives in Sparta with his wife, Christina, and their son, Carter.